A bunch of unrelated crafty news

I'm not progressing on the sontag. In fact, I'm regressing. I took it with me to knit on train, and lost stitches in the packpack... After many many attempts to rescue it somewhere further bellow, I decided that the only way to keep my sanity about this was, paradoxically, to start it all over again. This time on circular needles, so there will be more room for the knit (thanks for the suggestion, crafty ladies from NeilGaimanBoard! - funny, the overlaps that happen online).
It does not make me happy, but it's the only way I can save the project without getting really, really angry. Besides, I made mistakes in the first rows and now I can start with a clean slate.


I made my first eylet on my regency stays. It's not a lacing eyelet, only an eylet for attaching the straps, but it makes me happy, because it proves my new old awl is a very useful thing indeed.
The stays are a total experiment, so I don't post about them in detail. If they turn out fine, I'll tell you about my successes, and if they do not, I'll tell you about my mistakes. Right now I still don't know which one it is, so I keep it to myself. I suspect my completely unconventional way of making them would only baffle you. So right now let me just tell you what I already mentioned, that I'm making them out of an old duvet cover. 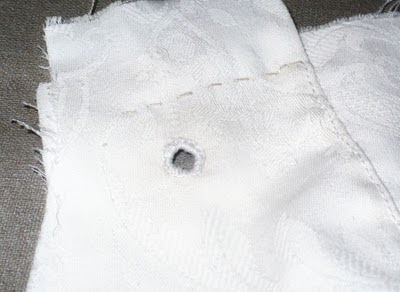 And I started making a bergére hat, out of a cheap straw plait men's fedora-like hat.
In fact, it's the second cheap straw plait men's fedora-like hat I bought. The first one I reshaped only slightly and wear as is, minus the ugly fugly cheap synthetic glued-on band and the elastic band inside. (I do not have a photo of it as it is now. It's simply less pointy and more rounded. Minus the bands.)
(And yes, I wear a men's hat. I have a large head. I've always had a large head. I suspect the pretty women's hats they had would not even fit me properly.)
Anyway, I unravelled the second one and started making a new shape out of it on Saturday evening. I ruined two of my fingers while sewing it together, but they're quite fine now, so I can continue and ruin them again...
I was inspired to tackle this by Jenni's fantastic capote - I think you'll learn much more about this technique from her post than you ever could from me, especially considering she had a teacher while I do this, again, unconventionally and on my own.
I use styrofoam base for a bobbin lace pillow which I got from my grandma (who apparently made it herself) for pinning the circular part of the crown on. After I make a big enough circle, I plan on moving it to the other thing, which is a styrofoam "wreath" with paper circle pinned on. I started on this thing, but it was soon clear that the paper was not sturdy enough, so for a start I used the "pillow". I have no idea how I'll continue after I finish the crown, but I'm sure I'll think of something by then... 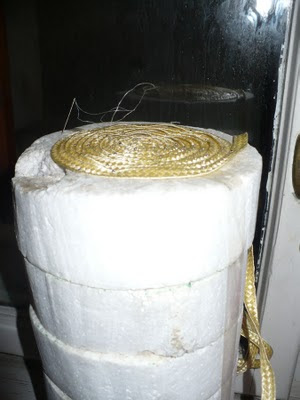 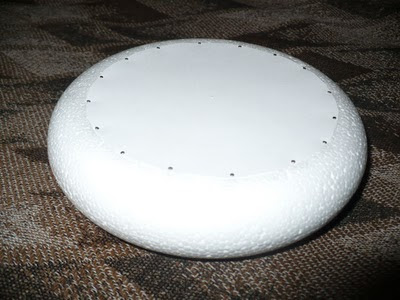 (Note: "thing" is a very poor substitute for the very clever Czech word "udělátko". The online wordbook I use tells me it's "dingus", but I have suspicions about that word. It does not seem to mean exactly the same. "Udělátko" is sort of cute and affectionate. I cannot imagine having the same feelings towards "dingus".)

Last thing. Books. Surprised?
I've just bought a book on Czech folk costume embroidery.
No, I do not plan making a folk costume anytime soon. (If any project would drive me mad, this would be it - just with the sheer cost of materials alone - last summer, I had a conversation on the matter with an interesting old lady who makes folk costumes. Don't ask me how much it costs to make lace neck ruffs for Moravian folk costumes. First, I do not remember anymore, second, it was crazy. The overall cost of a Moravian folk costume is, I think, about 20 000 CZK.)
But I thought, what a great source for historical embroidery stitches!
It is. It just seems it's not exactly geared towards ordinary semastresses, rather towards research experts or someone like that. Still, I think if I get more into the details and try the techniques out on scraps, I can learn a lot from it. Plus there are many photos of actual embroidery. Only in black and white and not the best quality, because the book is oldish, but always with the stitches listed below. Some interesting techniques! 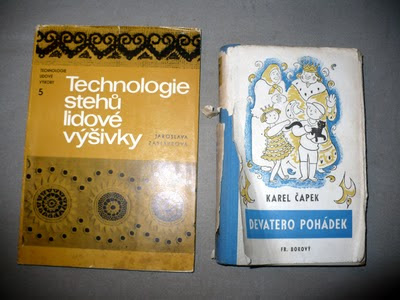 The other book is not crafty at all, but I could not leave it out. How could I leave out Karel Čapek, with Josef Čapek's delightful illustrations? Fairy-tales. :-) Published 1941.
Vystavil Hana - Marmota v 20:02