I'm sooo late with this. It was actually meant to be the first challange, Make Do and Mend, because that's mostly what this is, a refashion. But, basically, instead of adding the finishing touches and taking photos, I kept just wearing it. It's so precious and useful.

The photos I've finally got are nothing special. It is, father remarked, the worst possible weather for photography. It's lovely to be outside - it's practically spring weather - but the low sun, shining so brightly, makes for - well, see for yourself:

Contrast! Whole areas of face washed out in light!
(Also, I honestly have no idea why the photo looks so red. It doesn't when I view it on its own!)

This coat started life as a coat I got for free on a clothes exchange, and it looked like this: 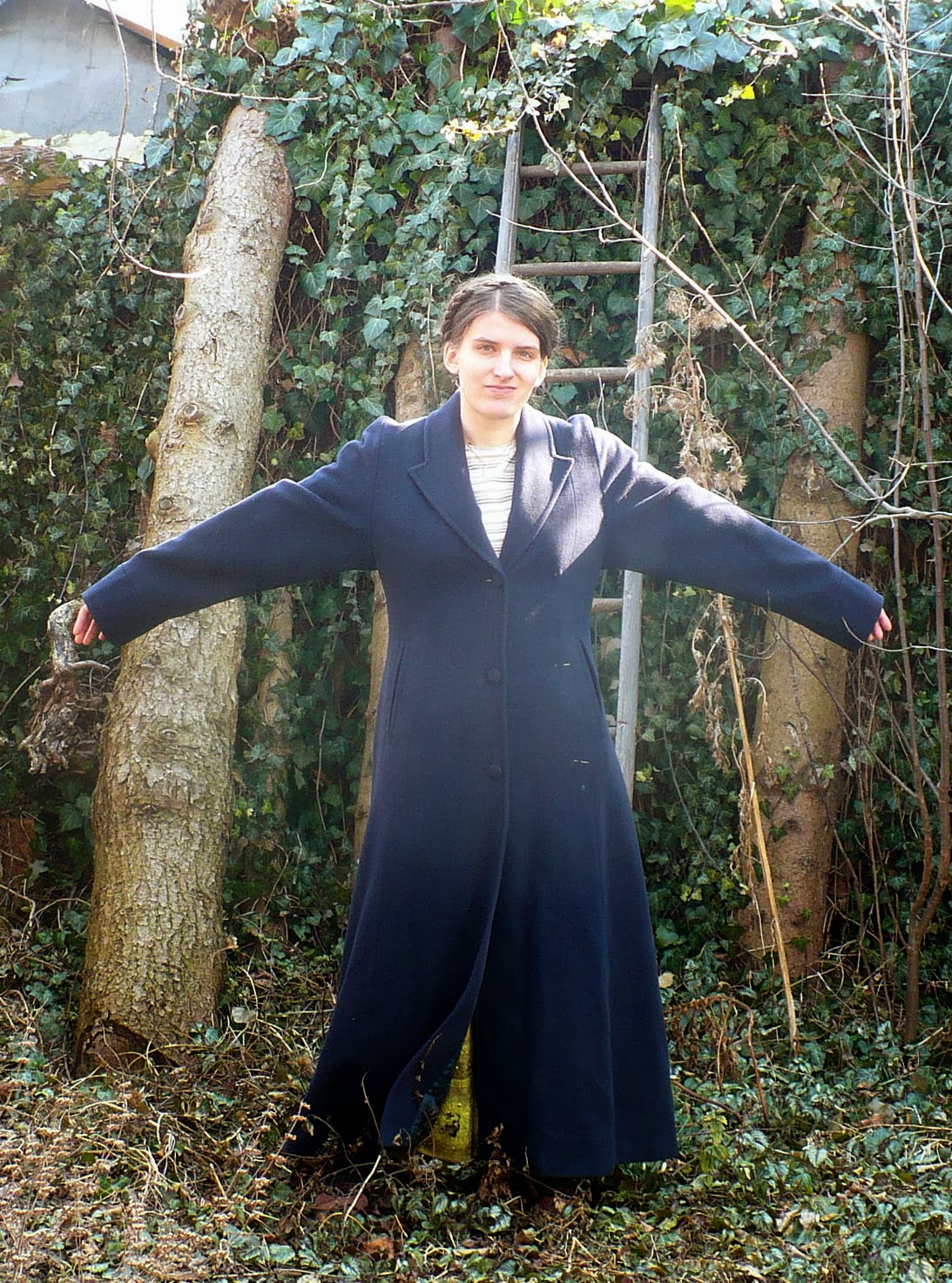 It maybe does not look like that much of a difference on the photo, but the difference is huge. It was about four sizes too big. Single-breasted. I've turned it into sort of double-breasted, by moving the buttons: that took care of the width. Length was eventually taken care of by chopping off about 8 cm from the shoulders and collar (in the back). I also narrowed the sleeves. I also took it in a little bit in the back around the shoulders.

That was the first level, which I already did last year - this coat's first outing was when I went to the National Theatre. And on that outing, with my Little Black Dress underneath, and a fierce wind blowing, I realised I needed another layer in the back and in the sleeves to keep warm in similar weather. So that was the second level.

For the back, I used the back of one of my medieval muslins, which started out as an old sheet... more Make Do! 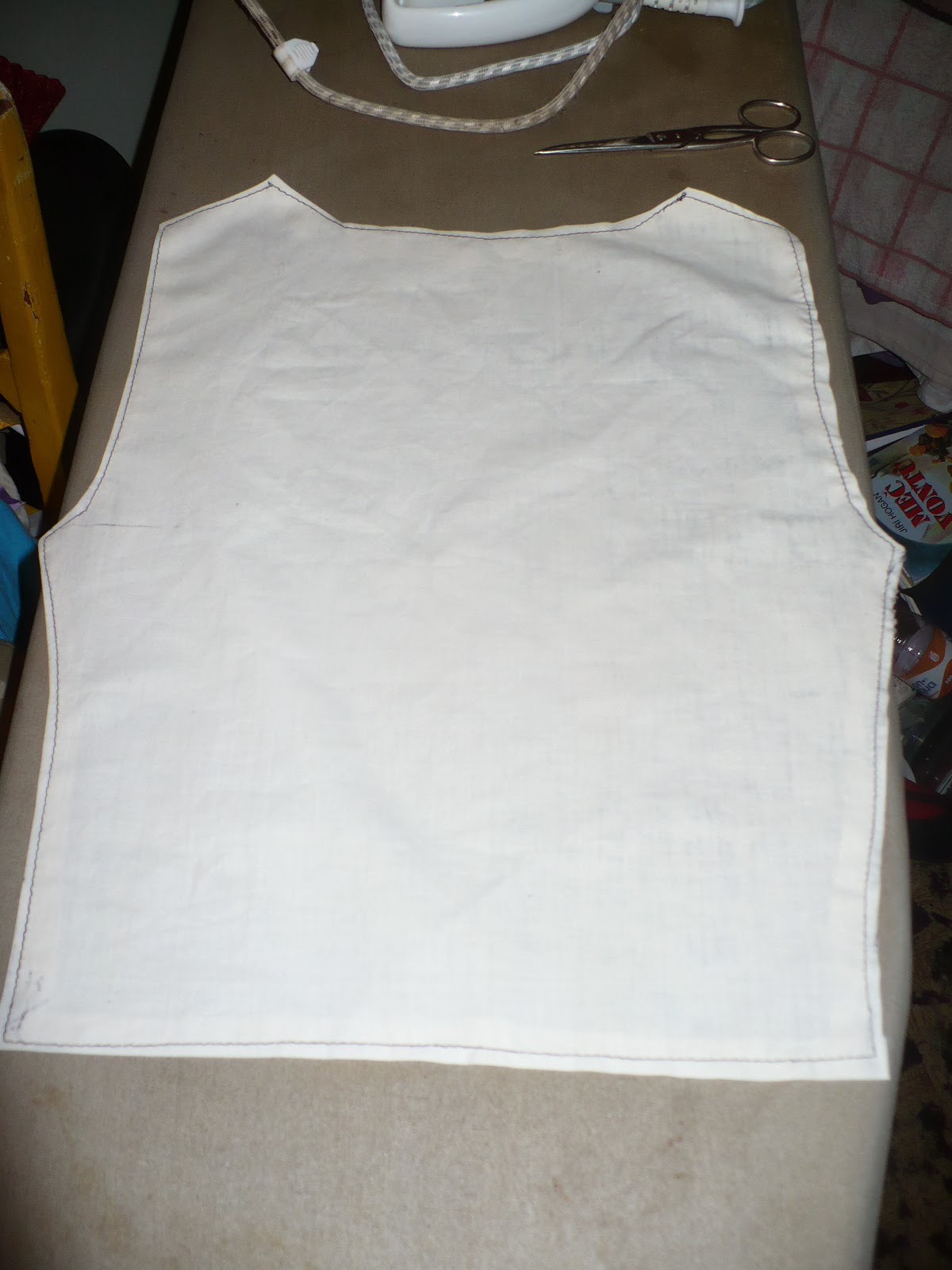 I turned and stitched down the edges - I did not bother changing the thread, so you can see easily - and then just tacked that to the back of the coat (with the lining removed from the top part of the coat for the process, of course).
I already had a pattern for the sleeves from resizing them, so I used that to make an interlining layer from another old sheet. I whipstitched those inside the sleeves. 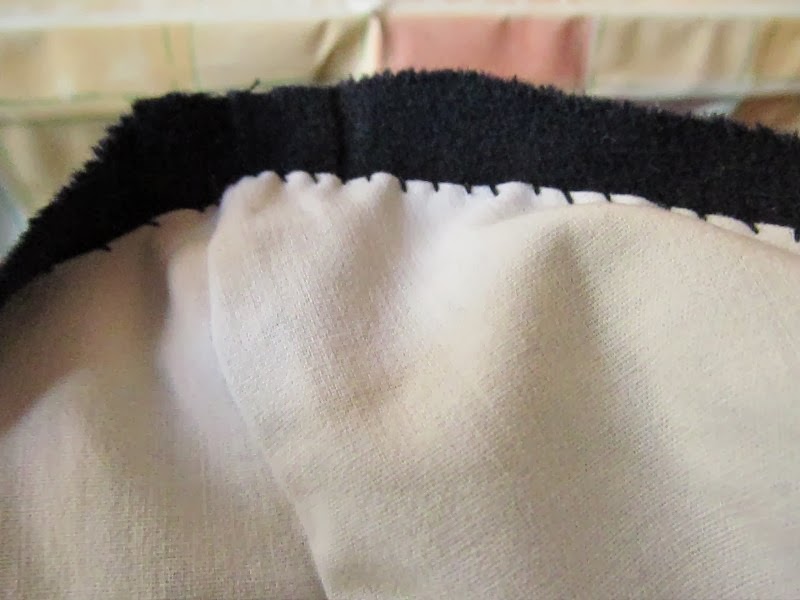 So that's for the Make Do part.

The innovation part is this:

And it's what I'm so excited to share! (Even though I'm excited about the coat itself, too. It's a wonderful soft wool, in my colour, in my style, fun to wear, warm to wear, it's got pocketses, perfect.)

It became apparent, in the resizing process (and actually even before it, from the state of their attachment), that the three buttons were hardly enough to carry the whole weight of this gloriously long woolen coat. So I added press studs / snaps in between them, and one on the inside of the "double-breasted", too, for that to hold in place better. 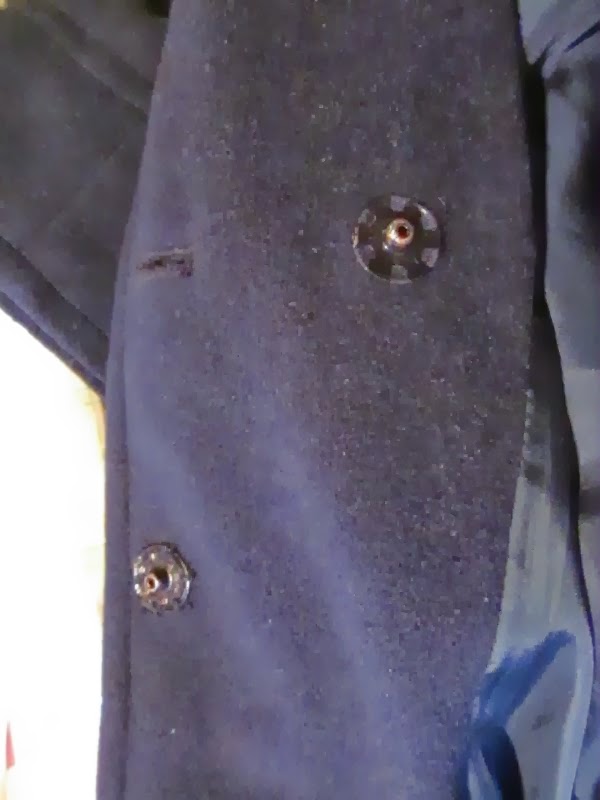 So yes, press studs / snaps. (Thank you very much to Ricky for clarifying the use of the terms below.) They are an important innovation in the clothes-making and clothes-wearing area. Infinitely more important for people like me who are not fond of buttons. (I like fabric-covered buttons, so I'm fine with those on this coat.) And they make everything easier for everyone, children in particular.

Apparently, press studs / snap fasteners of some kind were invented in the second half of the 19th century, and for the reasons above and more, they became quite popular. Most sewists today probably know from experience that they make for more discreet fasteners, too, sometimes.
But it wasn't until 1903 when a Czech inventor named Hynek Puc, in a company of a certain Mr Waldes in Prague, invented a machine that made putting press studs / snap fasteners together much faster and easier - and much more economically feasible, too. These new ones were named Koh-i-noor, became even more wildly popular worldwide, and they are produced and sold under this name to this day. (You can read more about it in the link.) 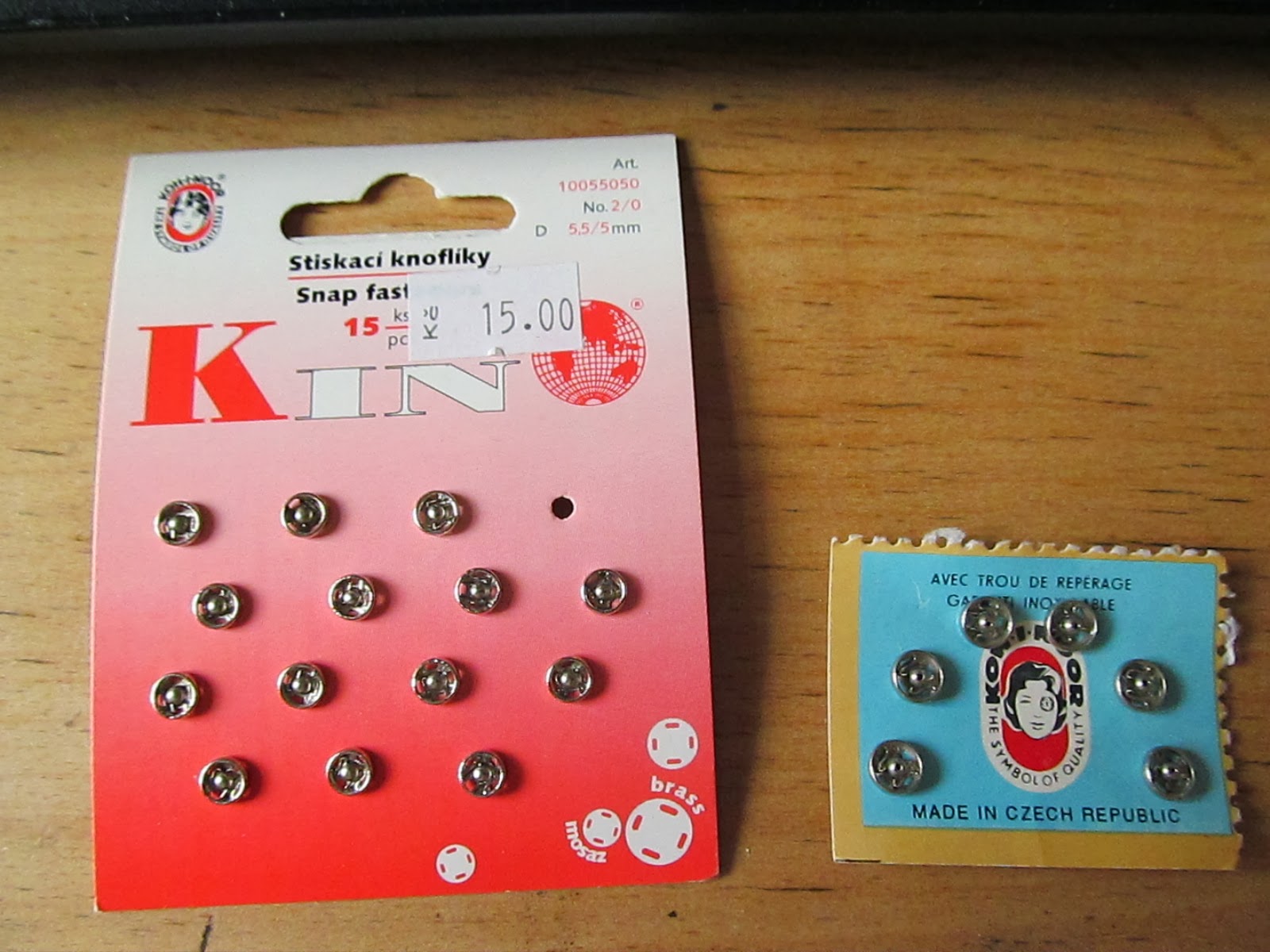 So you can imagine how tickled I was to be able to use a Czech innovation for this challenge!

Obviously, because my coat is just a refashioned modern coat, the historical accuracy is rather hazy. I was aiming for a vaguely 1930s style (I like my beige cloche), and I think the style is there, because my friend's mother remarked on it, without me saying it first, when I wore it to church on Christmas (turns out she used to have a very similar coat that had belonged to her grandma). :-)
But it's longer then the 1930s coats I've seen. I liked the length, too (it's very useful for when I wear shorter skirts in winter!), so it's actually stylistically closer to the actual era of the invention, I think. 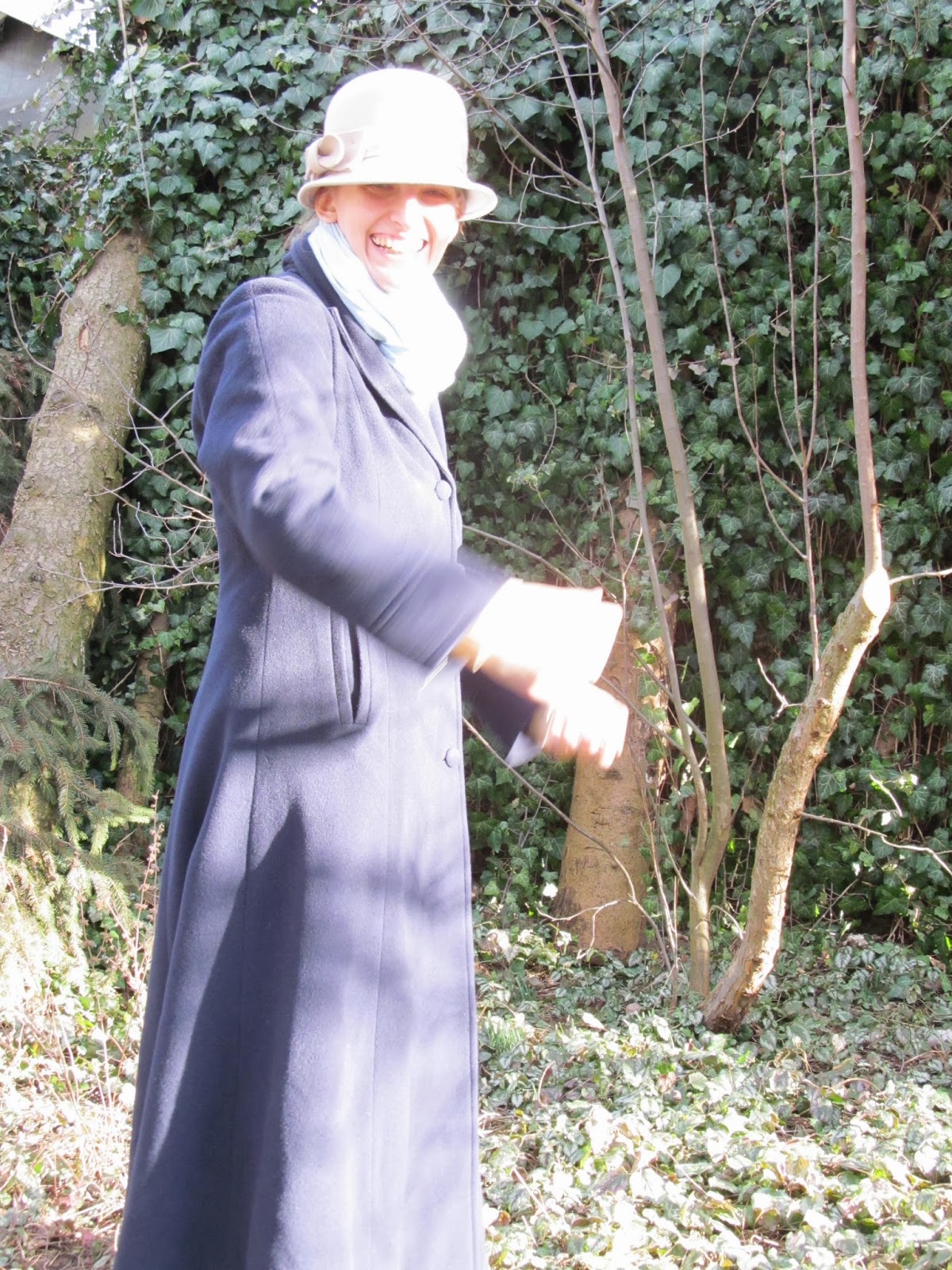 I wanted to take another of those photos with a cat, but the cat had other ideas for what to do with her time. I tried to hold her the whole time the self-timer was preparing, and then she slipped away from my arms and ran away just as the photo was being taken.

Aah, I can't get over how wonderfully snuggly this coat is.

Fabric: A 100% woolen coat (with modern polyester lining) + old cotton sheets for the interlining layer
Pattern: none
Year: Let's say 1905-ish and/or 1930s-ish
Notions: Black thread, Koh-i-noor press studs / snap fasteners, a piece of anachronistic but needed fusible interfacing for a spot in the collar where the original interfacing was damaged
How historically accurate is it? Not much, because it's a refashion of a modern coat, including fusible interfacing. But most of the things I did to it are historically plausible, I think; and the innovation I used definitely is.
Hours to complete: I've worked on it on and off for over a year, so I truly have no idea whatsoever
First worn: Um... let's say today?
Total cost: This is another of my favourite things about it - coat was free, interlining and fasteners were ancient stash, so all it cost was a bit of thread and a bit of interfacing: somewhere in the area of singles or tens of crowns. Not bad at all for a 100% woolen coat that's perfect for me! :D
Vystavil Hana - Marmota v 19:23