Drafting sewing patterns in Inkscape: Setting up your grid

If you want to draft patterns in Inkscape (which is a free vector aka line-drawing program, aka the free alternative to Illustrator), your best bet is to start by setting up the auxilliary grid. I find that with the help of grids, I can turn paper patterns digital even without mucking about with scanners (which I don't have myself) and the correct resolution - more on that later, hopefully. But the best part for us historical costumers? If you set up your grid right, you should be able to do scaled patterns or draft those block / apportioning rulers drafts straight into your own measurements. (With the caution that things like bust cup sizes still won't enter into it - always do mockups.)

Although that's a step too far if you don't yet know how to set up the grid to your specifications. Which is something I've only just discovered how to do properly myself, so I'm happily sharing.

I'm sure there are other tutorials for this out there; but I often find it's easier to read tutorials written by someone coming at the problem from the same angle as you... so here's from a pattern-drafter and historical costumer to others. 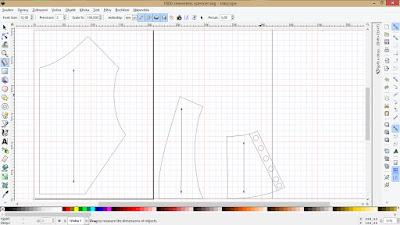 Here's my sleeveless spencer pattern, digitised with the help of Inkscape grid, still missing its side piece for some reason. I'll have to look into why I stopped at that point; I suspect it's because I lost the paper pattern...

Now, up front, I'm Czech and my Inkscape is in Czech, so sadly I'm not always sure about the exact English terminology. If you have the same version of Inkscape, things should hopefully all look the same, though. Mine is 0.92.2 (5c3e80d, 2017-08-06). (Which reminds me maybe I should look for an update.) You should find yours in the Help section under About or some such.

So, yes, I've only just figured this out properly. In the post about drafting a corset from pictures, I mentioned that I had trouble switching my grid to milimetres... It's because when you change units, Inkscape is clever and retains the dimensions of your previous grid! :D

Inches require more math and theoretical mathematical thinking. Which goes to show that inches are an older unit from a time when people just did things with physical measures that could be folded in half, instead of with mathematics in their heads...

So, to set up a grid for the first time, you go to File Properties, under the Grid menu, and set up a grid by choosing the type of grid you want (apparently it's "Rectangular" in English) and clicking "Create new".

(BTW: If you want to draft hexagonal patterns for patchwork, the other type of grid can help with that - which is something I should have realised about a month ago when I mucked about and struggled with trying to draft out the Golden Wedding Ring block...)

Make sure you have checked that the grid is turned on and visible (important!). The last option says something like "snap only to visible grid", which means that if you zoom out enough that you can only see your major, red lines, your nodes will only snap to the red grid.

And then you define the exact properties you want your grid to have.

Once you have once set up a grid, you can just turn it on or off, and just change the properties as needed - unless you want the other type of grid, or unless you removed / deleted it somewhere in the process, in which case you have to create a new one again.

This is how I get a "milimetre paper" effect with my unit being milimetres: 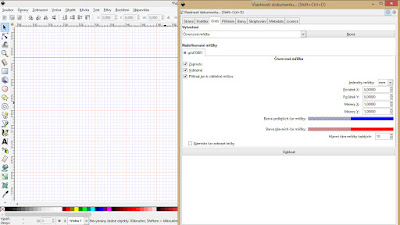 You go to the Grid menu on the right, choose your unit, and then decide at what intervals you want your lines to be. As you can see here, I chose to have my basic, blue lines at 1 mm and my major, red lines at 1 cm. 1 cm is 10 mm, so that's easy. Your basic lines will be at every 1 whole unit, in both directions (along the X and Y axes), and your major lines will be at every 10 lines (that's the last setting there at the bottom).

You can also check (bottom left) that you want your grid to display only as dots rather than lines. But personally I find the lines much easier to see and work with.

Note that whenever you change any of those numbers in the menu on the right, you have to hit Enter or click in another menu "window" for the change to take place. Other than that, it's pretty straightforward.

Where it starts to get a bit confusing is when you decide to change units. If I switch my units to cm, I get this: 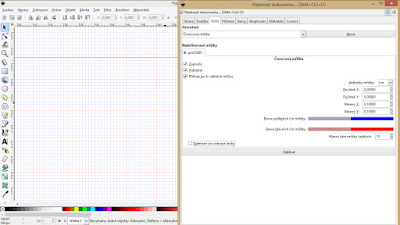 This is why I had trouble getting mms out of my grid when drafting my corset pattern - I did not notice that the numbers had changed when I switched units, so I could not understand why the grid resolutely stayed the same...!

(You could also change where your grid is centered on the X and Y axes. Those are automatically centered in the left bottom corner of your page. Messing with that is more trouble than it's worth for our purposes - we don't need that because frankly the page does not enter into the drafting process at all the way I do it - except maybe as a rough gauge for how many pages the printed pattern will take. If for some reason you wanted to change where your grid is centered, you would have to know the exact coordinates of the point where you want to move it.)

Of course, you don't have to have your major lines at 10. I can do a "half-centimetre" version by setting them up at 5 mms: 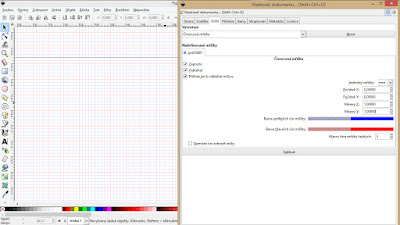 The only thing that bothers me about this system is that I'm limited to two types of lines, so I can't have both a detailed "milimetre paper" and mark 5 or 10 cms as well. If I want that type of super-helpful grid, I have to add more lines manually... which can interfere with my drafting a bit as those "objects" get in the way. Maybe there's still a way around that but I haven't figured it out yet...

To help you, the various divisions translate into decimal numbers like so:

And if you're math-and-numbers-challenged, you can write down those numbers or print them out on a piece of paper to stick at some place where you'll have it in sight and won't lose it.

(You can get those numbers easily with the help of a calculator by dividing 1 : your division number. If you need, say, 3/8, you then just multiply your 1/8 decimal number by 3... But part of the point of setting up our grids in Inkscape is that you avoid that further multiplication and just use your grid as a ruler.)

So if you want an inch grid divided down to sixteenths of an inch, you set it up like this: 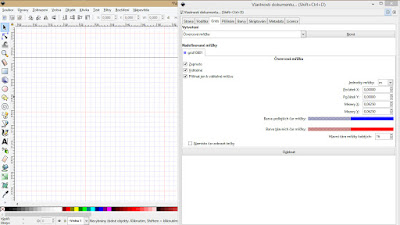 Just for fun: Because Inkscape goes that detailed with its decimal numbers in these settings, you can go extra-detailed with... what is it called, thirty-secondths? 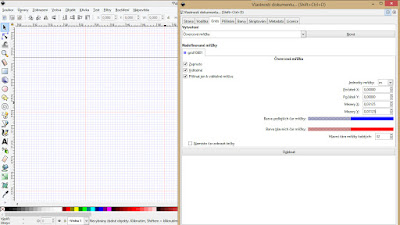 And now you can give Vanessa's tutorial a whirl regardless of whether your pattern draft uses cms or inches.

As a teaser for how you would do the apportioning rulers stuff: Your X and Y measurements don't have to match. 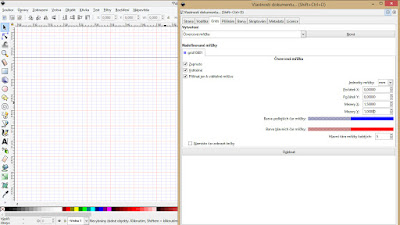 Here's the same grid in inches: 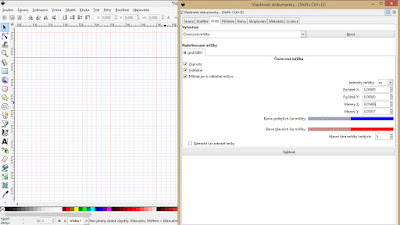 So... yeah... just with some help from a calculator (you most likely have one on your phone), you can totally do the apportioning rulers drafts to your own measurements. Or create your own apportioning ruler / tape measure for doing it by hand. But more on that at some later point...