No, that's not a mistake: it really is a make from 2017 (in its final finished state). There's really a lot I've never gotten around to blogging about... 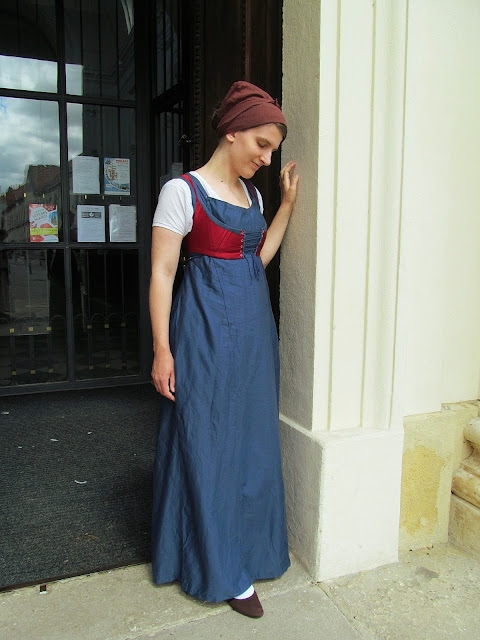 Once upon a time, I fell in love with the 1802 portrait of Heinrike Dannecker by Gottlieb Schick, and decided I wanted to make an outfit inspired by it - really possibly my favourite portrait from the era, fashions-wise, as I've already mentioned. 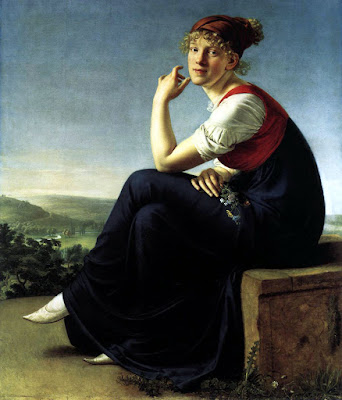 Then later I came across two other portraits involving sleeveless bodices that I took inspiration from: this ca. 1795 miniature by Augustin Dubourg and the 1800 portrait of the Comtesse de Bonneval by Anne-Louis Girodet de Roussy-Trioson which was good for figuring out how the front would sit at a slightly later date than 1795. :-) (Links to Pinterest because the original links are broken.) - Yes, they're both blue worn over white dresses. My colour bias is showing.

I had some fabulously shiny cotton satin upholstery fabric that I had snatched up from a remnant bin and that seemed to want to become this sleeveless bodice. Red! Shiny for evening wear! So wonderful.

I played with the pattern for my transitional "bra" to turn it into a front-lacing bodice, and as I placed it on the fabric, I thought "maybe I could squeeze two things out of this fabric" and pieced the front to accommodate a more tetris-style pattern placement.

I ended up shifting the grainlines in the three front-and-shoulder pattern pieces in comparison to the "bra". Since it was my own experimental pattern it wasn't exactly set in stone anyway but: 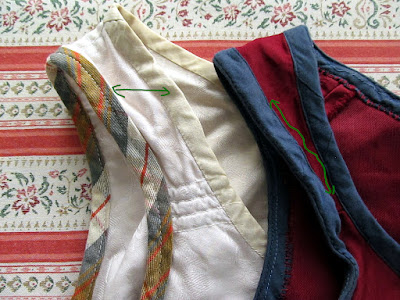 I find that shifting grainlines when altering and piecing historical patterns is actually mostly OK - as long as you keep your grainlines mostly the same / symmetrical on both sides of the body, don't remove bias from where it serves a purpose, or don't put bias somewhere you really don't want to stretch out! (Which was actually why I shifted it on the shoulder strap pattern piece: I wanted it lying nicely along the grain. That oddly shaped front bit got its grainlines shifted just for the sake of placement on fabric, though.) When loking at the patterns in the priceless German disertation on the Kostümsammlung Hübsch by Johannes Pietsch, I realised this was done historically, too, with pieced garments. So in that context, you can totally shift grainlines away to your heart's content!

I sewed the bulk of the seams by machine because I was excited and wanted to finish this bodice faster than my previous historical makes (four years is a rather excessive precedent and is stretching one's patience, once the undergarments are already done). Then I got the bright idea to fell stitch / whipstitch (?) the seam allowances down, which turned out to be not very brilliant actually because it resulted in ridges on the outside (thick upholstery fabric). But I kept it that way while I was ahead...

The lacing eyelets were rather a pain. The thick upholstery fabric was so hard to make proper awl holes in! And deciding to use buttonhole silk twist didn't help - it's bulkier. Though also neater, even if mine turned out to be lighter in colour than the fabric. 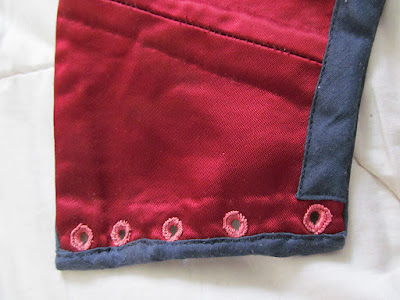 Thankfully, I decided to lace it with a cord I knitted myself out of cotton crochet yarn, with two stitches only (just like lucet, without a lucet), which is thin enough to pass through the resulting tiny eyelets (a large blunt needle in place of a bodkin helps, though, although it also passes through with more difficulty). 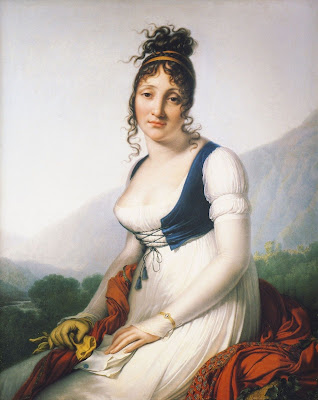 I spaced the eyelets as suitable for spiral lacing - although looking at Comtesse de Bonneval, I clearly could have gone with a regular criss-cross placement; I somehow forgot that part. (I need to work on keeping my inspiration images and sources before me throughout the process of working on things because that sort of thing happens to me far too often.) 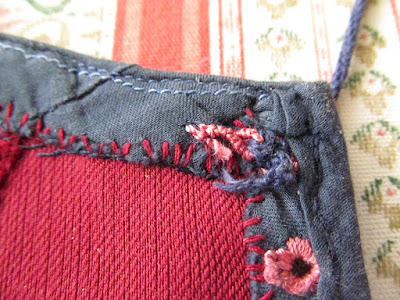 I made a thread bar on the inside at the top edge, also from my buttonhole silk, to tie one end of the lace to. The bottom end of the lace I originally usually led back up underneath and tied to the thread bar again as well. When I had a not-lacing-tight kind of day (like when I wore this over a modern bra to church...), I just tied that end off at the bottom. Then that became the norm because my bust had grown about 6 cm since I first made the bodice... and now I've lost some cms there again, though not the full 6. But that's the flexibility of lacing for you! :-)

Originally, I only finished all the edges with piping. I don't even think it’s historically correct for the period anymore (maybe it's only an 1810s-onward thing?); and in either case, the folly of using an ahistorical thick upholstery fabric this way became apparent soon: the fabric ripped / unravelled in several places at the edges in the first wash, before I even had pictures taken. (All the photos in this post were taken during the restorative process or afterwards, I have zero pictures of it in the only-piping state...)


ETA: The problem is that, in order to turn the seam allowances around the curves, I had to cut them quite narrow and - well, the thick fabric is simply not suited to that sort of treatment, together with the thick turn of cloth it puts too much strain on it, and the fact it's a satin (= a somewhat looser weave) did not help... 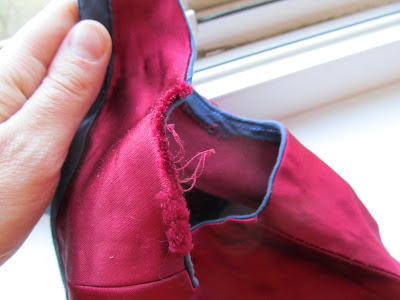 I was grumpy about it for a bit, because it ruined the clean look I was going for, but then I caved in and added more trim to save it / cover it up: bias strips whip-stitched (fell-stitched?) to the piping & stitched down with backstitch on the other side, and bias binding at the lacing holes in the front.

ETA: Notice that the bottom edge, which isn't so curvy, survived my piping treatment unscathed, presumably because I did not cut the seam allowance as closely as I did around the curves and the lacing holes at the front openening. 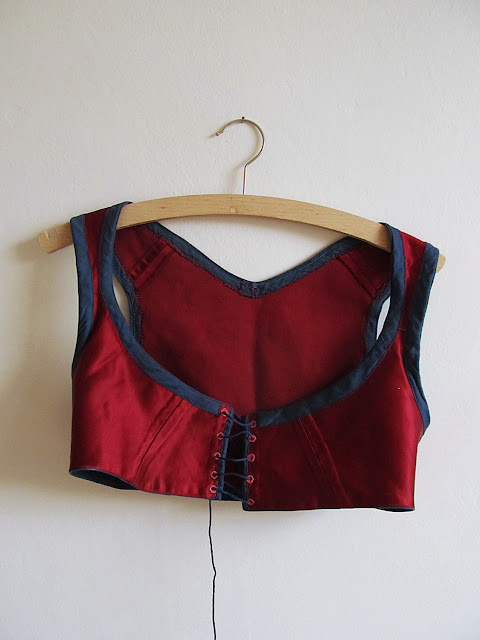 Anyway. Despite the problems, I'm happy with it. I'm particularly happy with the basic shape of the pattern, because that looks exactly the way I wanted it to look. It looks so good I could not believe it when I first saw myself in the mirror and later photos... It sits just like the bodices from the portraits. It's a very satisfying experience to get that result without the jumping board of a pattern taken from an extant garment, with something you just kind of eyeballed. 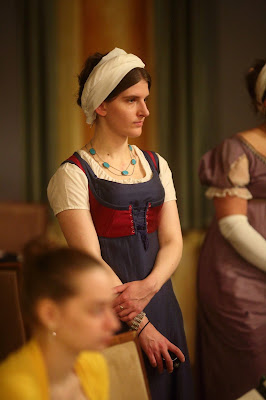 This is a photo by Páv Lučištník, so far the only good one I have of myself in full Regency getup... my tendency to forget to put on jewellery strikes often! :D So does my "RBF"; for some reason the photos of myself from the events that I know of always make me look bored even when I know I was anything but! Here I was looking at the people dancing and apparently previously tried to take some photos of my own. It's back from the bodice's first outing in its altered state in February 2017. I think I need to revive that headdress style...

So I'm totally going to one day make another one in similarly rather inaccurate cotton velvet, with hopefully more accurate construction techniques. I was originally thinking of a blue velvet remnant, but now there's the Purple HSM challenge and I thought back to the purple velvet... and there's Vanessa's oh-so-pretty printed cotton one... aaand I have some thrifted silk garments intended for repurposing as accessories... so, considering how easy it is to make this garment out of remnants, I suspect I'll eventually end up with a wide choice of sleeveless spencers to spice up my Regency ensembles. :D

I also want to eventually share the pattern (because it turned out so well!), but this post has been in limbo long enough and I don't want to keep waiting till I finish digitising the pattern... especially because it occurred to me that with how simple it is, it may be a good training ground for improving my grading skills...

What the item is: “Regency” bodice / sleeveless spencer
The Challenge, and how this item fulfils it: HSM '17 #2: Re-Make, Re-Use, Re-Fashion. I used trim to save / cover up fabric damage.
Fabric/Materials: Marked down remnant of red cotton upholstery-weight satin (NOT recommended, with emphasis!); navy blue lightweight cotton sateen for trim (pretty great!)
Pattern: My own, an evolution of my wrap stays / brassiere.
Year: c. 1800
Notions: red thread (polyester, I believe), dark blue cotton thread; red buttonhole twist for the lacing eyelets & a thread bar on the inside which I tie the lacing to; dark blue cotton crochet yarn knitted into a lacing cord; thin linen cord for the piping.
How historically accurate is it? Meh. Fabric is wrong, some of the methods are wrong (it’s even partially machine-sewn). On the other hand, the shape is pretty spot on on me, so that’s a plus. Also, the Re-Make part is pretty good: using trim to cover up damage is a valid thing, bias strips as trim are valid as far as I know, and the handsewing stitches I used (backstitch & fell stitch) are valid.
Hours to complete: No idea whatsoever. Sewing down the trim at one armhole (cca 52 cm) took about 1,5 h, I think?
First worn: In the original state, for the first and the last time to a production of King’s Speech by the National Theatre in Brno (an occasion that seemed to call for an evening dress, so I used the best I had :D). In this new iteration, to the “All in the Garden Green” ball held by Jane Austen CZ on February 25 2017 in Brno-Tuřany. And then many times afterwards, not all of them historical occasions, either.
Total cost: Low. I don’t remember how much any of the materials cost anymore, but in any case, the red fabric was marked down and I only used about half of it, the blue was cheap to begin with and I only used a bit of it, and there wasn’t much thread or yarn used, either. All in all, I’m guessing about 70 CZK ( = less than 3 USD)? The cost would go up if I did it more correctly and used a thinner, historically accurate fashion fabric coupled up with a linen/cotton lining.