There was a decided lack of posts in 2013. So I'm borrowing something from Natasha Marie (who borrowed it from someone else) and posting a wrap-up.
Seeing as this also happens to be my 200th published post on this blog, I think a wrap-up is very fitting.
Warning: it's long. I'm making up for a year of little posts. So it actually comes in more parts.

What did you do in 2013 that you’d never done before?
Saw an opera. My sister and her husband’s birthday gift for me was a visit to an opera they’d been to several times before already. Now we all want to see it once again, and more. It’s a modern recreation of the earliest at least partially preserved opera, and the music has only the best features of both.

(There's Czech monologue/dialogue until about 1:55.)

(Awwwww, everyone, and I mean everyone, needs to hear that thing! In person! One of the saddest realisations of 2013 is the realisation that that’s not humanly possible.)
I picked one of the artificial laurel leaves they pour out during the performance and keep it as a memento. I do not think I was the only one.
After that, we met with some of their friends from church and made pretzels, which was a first for me, too.
Had port. (Nom!)
Made plum cakes. Cuts. Whatever. (Yummy.)
Made handkerchiefs. :-)
Read medieval English literature in actual medieval English. (With lots of footnotes.)
Visited Karlštejn. Tourist trap level as expected. The guide's level of knowledge was a less expected letdown. While the castle itself is certainly interesting, you might want to save your money and go visit somewhere else, maybe Ploskovice. I'll post about it this year, promise. 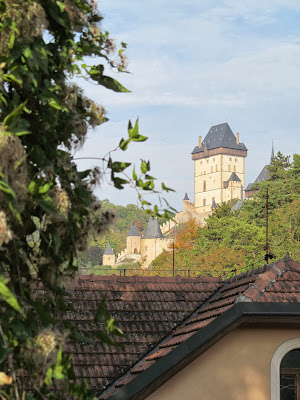 Spent a whole weekend with the people from our youth magazine editorial board (we're mostly volunteers), learning about media and having lots of fun.
Spoke to a Touareg. (Something along the lines of “Could you please sign this for me. – Thanks. – It was wonderful.” See below.) 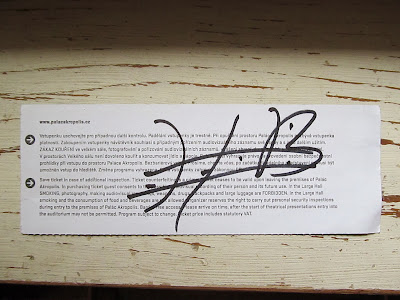 Did you keep your New Years’ resolutions, and will you make one this year?
I don’t do New Year’s resolutions as such, so there. I do make occasional resolutions (occasional as in for / at an occasion), and right now it’s to finish more of my sewing.

Did anyone close to you give birth?
Not anyone very close to me.

Did anyone close to you die?
Sadly, two of our cats, Yksi and Kuusi (so yes, that Kuusi lesson is a retrospect...).

What countries/states did you visit?
I visited many new places around my own, and loved it! (The year before, it was Finland, which I still have not gotten around to telling you about. Ahem.) What would you like to have in 2014 that you lacked in 2013?
I cannot think of anything in particular. Except maybe attending the interpreting course.

What date from 2013 will remain etched upon your memory?
I don’t remember any particular dates for things that happened to me. So I’ll go with November 8th when my friend did not take an important exam in the end. :D It’s because it’s an important date from my country’s history (the battle of White Mountain) that I could never remember, and now I do!

Did you move anywhere?
No.

What was your biggest achievement of the year?
Probably translating quite a lot into English, in an official capacity. It's not something that you should be doing, mind you, translating into a second language and not your own; we'll have an English editor go over it.

What was your biggest failure?
Probably still failing to finish my sister’s kathak skirt. My sewing failures stand out the most to me, because they’re still lying around the house to remind me.

Did you suffer illness or injury?
Thankfully, nothing serious, just the usual seasonal colds.

What was the best thing you bought?
One thing? Phew. That would be very hard to decide; I don't buy big things.
A beige felt cloche and bamboo scent in January with my Christmas money – the hat is pretty and practical and very much me, and that is actually my first scent, one that’s very much me, too (before that, everything had always smelled just perfume-y to me).
A pair of lace-up boots. 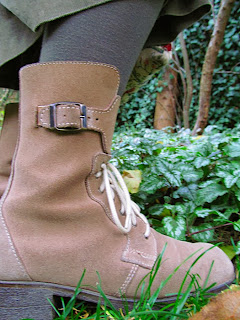 The Felicitas Queisser scarf - I wear it all the time now, 1797 fichu en marmotte style. 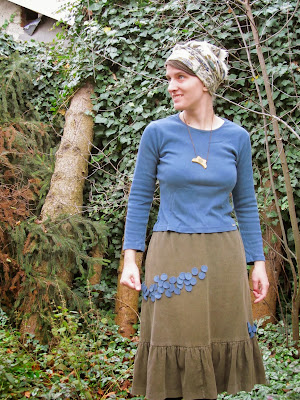 Those 15 meters of lining fabric - that was definitely the haul of the year, maybe even of the decade, but only fabric-wise.
And I finally got myself a purse/shoulderbag that's almost perfect. It might even be leather and it was dirt cheap in a thrift shop. My only complaint is that I would prefer a wider shoulderstrap.
Two Cadfael books, the last in the shop, hidden away in a "last copies" shelf: one for me, one for my sister for Christmas.

Whose behaviour merited celebration?
I think the biggest thumbs up go to my sister for inviting her Latvian colleague and friend who had to stay here over Christmas to celebrate with us, and the rest of the family including grandma for going along with it - even though in the end it did not go quite as planned because of my sister's illness.

On the internet, it's without a doubt Leimomi, for running the Historical Sew Fortnightly which turned out to be hugely popular and way more time-consuming than she had expected; and doing it again this year!

Whose behaviour made you appalled and depressed?
I can’t think of anything. It was a fairly happy year, all in all.

Where did most of your money go?
In general, school.

What was the best concert you’ve been to this year?
It’s a tie between Mark Knopfler & Co.’s concert in May (an online newspaper review gave it 90%, which caused an outrage from commentators who demanded to know what was their excuse for the lack of the remaining 10% :D) and La Dafné in December (an online review gave it 100%). And how could I forget Bombino?! 2013 was very good, concert-wise.

What song/album will always remind you of 2013?
Privateering! The album. I still love it more and more and more. Song is probably Yon Two Crows from it.

Or maybe Her Tenere by Bombino. Yes, that will be the song, because friends and concert and awesome discoveries about the world thanks to the internet.