The Baltics 2011: How it all began; the travel adventure

(I apparently invented a new English word for my convenience. The Word spell check does not know any Baltics. Whatever.)

It began with my cousin telling my sister there was a man looking for people to go to Christian events in Estonia. In the end, it was me who applied for a position of a workshop leader in a day camp in Karitsa, a small village near Rakvere, on the grounds of me a) learning Estonian, b) being a creative person, c) wanting to go to Estonia. It was all a bit different in the end, but I’ll come to that later.
In the meantime, father also decided to make use of my sister’s having let a room in a parsonage in Latvia, and to go on holiday to the Baltic countries and see some places he hasn’t seen yet. So we combined it.
I went there a week earlier, by bus (it’s cheaper), father flew by plane (he needed to save time). We would meet in Estonia after the camp was over.

OK, so that was the idea. It seems impossible to buy a ticket from Prague straight to Riga (although, weird thing, there actually is a connection), so I bought a return ticket to Vilnius, with the intention of going from Vilnius with a different company (or, rather, a sub-company of the one I went with).
That proved complicated. The bus I went from Prague with had a monumental delay: An hour and a half, and the drivers seemed totally unfazed by it. They did not tell a word, as far as I could understand. We stood in Kaunas for about 45 minutes, so clearly at that time we already had a delay, yet that did not bother them at all. They had all the time in the world. I did not. (Standing next to us in Kaunas was a bus going straight to Riga, but I did not have a ticket for it. You can imagine how frustrating that was...)

In Vilnius I did not realise I still had Czech time on my watch and thought we only had a 30 minute delay, so I happily went to buy a ticket to Riga. The lady in the box office told me to go QUICK if I wanted to catch my bus, which was where I realised there was actually an hour more in the Baltics and my bus was leaving NOW.
So I ran, and caught my bus, and got involved in a complicated, four-way four-language discussion with the driver and some customers. I tried English first; English did not work. The driver spoke Russian, so I used for a minor part the poor remnants of my Russian and for the major part my natural Czech. And injected an Estonian or German word into the mix. The driver did not accept euros. I only had euros, because, alas, you can’t get Lithuanian lits in the Czech Republic. I intended to get some in Vilnius, which I now had no time for.
Thankfully, a lady in the bus exchanged for me. It was a rather inconvenient exchange rate, because she had a limited supply of money and I only had banknotes (which, with euros, is quite a lot of money), but at that moment, I only wanted to be on the bus, and that worked. Thank you, unknown lady! I still paid less than I would if I were to go by a later bus, and there would be lots of other inconvenience in that case, like coming to Riga really late.

For the record, Lithuania is a beautiful country in its own right. I’ve already been there three times, though, so this time around I left it out. But here’s at least a snapshot of a typical Lithuanian landscape: 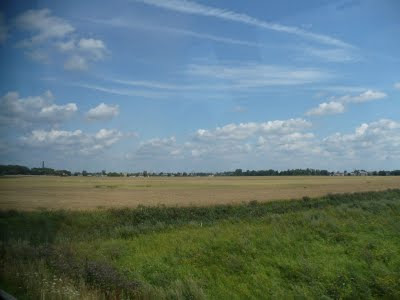 I slept through the Lithuanian/Latvian border and woke up somewhere before Bauska. The first photo I took in Latvia was a grazing horse. In Riga. We were standing in a line of cars, so I took the opportunity to take a photo of it. Of course, just then the bus finally moved. 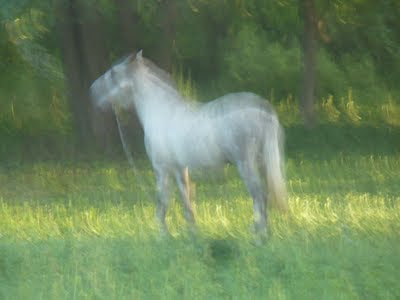 On the bus station in Riga my sister met me, we went to the railway station, I had a cold beetroot soup with sour cream (nom), and then we went to the smaller town she lives in when in Latvia.
I intended to go to sleep as soon as possible. However, there just was a small celebration downstairs in the parsonage, and my sister wanted to introduce me to her Latvian friends, the pastor, his wife and other people who live in the parsonage. So we dropped by, and there were immediately lots of food forced on us. Since I was rather hungry, I did not mind. And we actually stayed a bit over midnight.
My sister told me it was a typical Latvian celebration: lots of food and lots of chaos. People just coming in and out, and talking without a pattern, listening to music and stopping the music... Actually, not too different from private Czech celebrations as I know them. :-) The forcing on of food is also a common factor.
During my whole time in the Baltics (nearly three weeks!), I did not take a single photo of food. Shame on me. Still, there’s a post on food coming, because the food in the Baltic countries is so great.

My sister’s (new) room in the parsonage is cheerfully yellow and really hard to photograph. 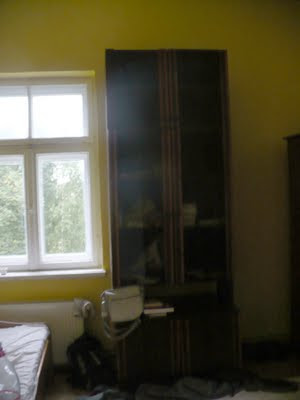 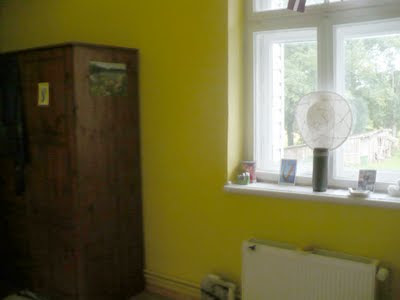 The next day we woke up early, went back to Riga and from there I went by bus to Tallinn. But Tallinn’s already a subject for another post. Or two.
Vystavil Hana - Marmota v 08:30